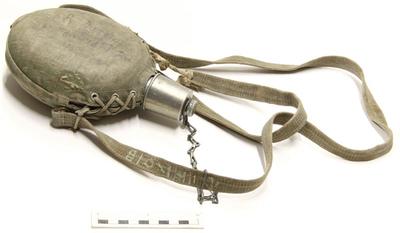 Production date
Early 1940s
Description
A Japanese Special Naval Forces canteen. The oval aluminium canteen has a screw top lid that is attached by a chain to the carry strap. Faint Japanese script is written in white on the carry strap. " R Dunlop / 17 Fairfield Road / Hawera " in written in faded black on the webbing.
See full details

Credit line
This canteen was one of several items collected by Bob Dunlop during the initial stages of the attack on Mono Island, in the Solomon Islands, on 27 October 1943. Bob, a young stock agent from Hawera, who served in the Pacific with the Thirty Six Battalion of the Third New Zealand Division, related his story in the book New Zealand in the Pacific War: Personal Accounts of World War II by Bruce M Petty. "We had to dig a perimeter around what was the Japanese headquarters, which was pretty empty by that time except for the ones that had been killed. There was a big marquee- a big tent. After I dug my foxhole, I thought I would have a look around inside the marquee for a few souvenirs, because the Americans were good at buying souvenirs, and they always had more money than we did. I ended up with a big clock, a Japanese flag, a Japanese rifle, a bottle of sake, and a Japanese water bottle with Japanese writing on it. When I came out through the tent flap, a Japanese ran out beside me. He fired a shot into the air, all our fellows dropped to the ground and the Jap ran straight through them and into the jungle. I would like to think he is alive today. I was grateful to him, really. He must have had a bead on me [in the tent] , and he could have shot me so easily, but if he had he would have alerted all the rest of the men-the rest of our company- and he wouldn't have got away."
Discussing the same incident in a Taranaki Daily News article in 2007, Mr Dunlop remembered the Japanese solider took off "like an All Black winger".