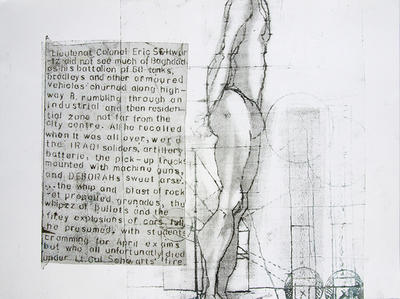 Production date
Circa 2005-Circa 2006
Description
Mono print depicting the World Trade Center complex, including the Twin Towers, and the legs and torso of a male figure. Four circled X's are depicted on the Twin Towers, indicating possible points of explosion in the foundations and the points of impact of the planes on 11 September 2001. On the left of the image, a box of text taken from a newspaper report is quoted. Artist Roger Morris has also inserted several of his own words. The text reads: "Lieutenant Colonel Eric SCHwar-tz did not see much of Baghdad as his battalion of 60 tanks, bradleys and other armoured vehicles churned along high-way B, rumbling through an industrial and then residen-tial zone not far from the city centre. All he recalled when it was over, were the IRAQI soldiers, artillery batterie, then pick-up trucks mounted with machine guns, and DEBORAHs sweet arse. ... the whip and blast of rock-et propelled grenades, the whipzz of bullets and the firey explosions of cars full, he presumed, with students cramming for April exams but who all unfortunately died under Lt. Col Schwarts' fire." The artwork draws attention to the bombastic nature of reporting around the 'War on Terror'.
See full details