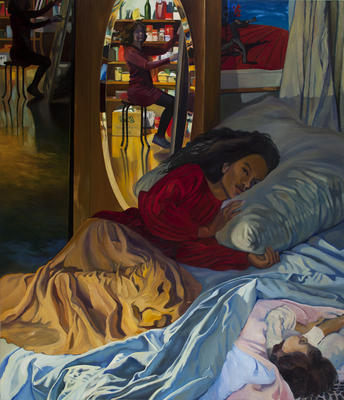 "Nina and Ruby with Marianne reflected"

Production date
1996
Description
Oil painting of Nina and Ruby resting on a bed with crumpled blue and pink sheets in the foreground with Marianne reflected in the midground. Nina has her head on a large pale blue pillow and looks directly at the viewer. She is wearing a red striped jumper and a long yellow skirt. Ruby is positioned in the lower right corner and is facing away from the viewer. Both Nina and Ruby have dark hair. Marianne is reflected in a large oval mirror and is shown seated on a stool at a canvas. She wears a red dress with dark leggings and blue and red shoes. Behind Marianne are shelves with brightly coloured containers on them. The image of Marianne is repeated in silhouette in the upper right corner of the painting. In the upper right corner a red and blue painting by Roger Morris of a man playing a musical instrument is seen partly obscured by the mirror and a curtain.
See full details

"Nina and Ruby with Marianne reflected"